I am delighted to welcome, author, Patricia M Osborne to my blog this week. Hi Patricia.

u to Rosemary for inviting me over to your blog during my ‘Chindi Author of the Week’ which happens to coincide with publication of my second novel, The Coal Miner’s Son.

Like many writers I gain inspiration from many sources. For me, water plays a big part. I love being by the sea but my second best is strolling around the lake across the road from me which forms part of the park where I spent time as Poet in Residence in 2017.

I can watch the geese, ducks and moorhens on the water for hours and if I’m lucky I get to spy a heron too. Influenced by Hilda Doolittle, otherwise known as H D Imagist, watching enables me to create images in my poetry. However, being a poet also allows me to transfer these skills to my novel and prose writing too, letting my reader see what I see.

Another way a writer gains inspiration is looking at pictures, photographs, or a statement, and using these as writing prompts which are a great way to free up the mind and prevent writers’ block. When I first started writing in a full-time capacity, I wrote every day in a journal. This has lapsed but one day soon I hope to get back to it. The journal is a fabulous form of inspiration because what seems like nothing when you’re writing it down, weeks, months or even years later it could be exactly what you’re looking to use in a particular poem or story.

When I was on my first residential creative writing course in 2012, we stayed at a place called Urchfont Manor in Wiltshire. The tutor sent us all outside for five minutes to watch, listen, smell, etc. I remember it well because it was my birthday. I took in the cloudless blue sky and various shades of green from the trees, grass and plants. When back inside the classroom we had to complete a five-minute freewrite. My freewrite later became a short story which was published in an anthology at the end of 2019 by Leicester Writes. Nothing is ever wasted.

National Trust properties are great places for inspiration. In fact the mansion at Wakehurst Place inspired me to create Granville Hall in my family saga series, House of Grace.

I like to visit Wakehurst on a regular basis, viewing the grounds, seeing what is blooming at different times of the year. Granville Hall features in House of Grace, The Coal Miner’s Son and The Granville Legacy.

At Wakehurst they have a nature reserve. If you go on a sunny day and the sun is shining over the lake, it looks like a lagoon. To me it was like walking into a secret garden and I’m hoping at some point to include this in one of my books

Freewrite is a method: ‘…Let the words tumble out. Write anything at all, what’s on your mind, what you notice.’ (Peter Elbow in Freewriting, p.23 of Creative Writing edited by Linda Anderson

Blurb for The Coal Miner’s Son

After tragedy hits the small coal mining village of Wintermore, nine-year-old miner’s son, George, is sent to Granville Hall to live with his titled grandparents.

Caught up in a web of treachery and deceit, George grows up believing his mother sold him. He’s determined to make her pay, but at what cost? Is he strong enough to rebel?

Will George ever learn to forgive?

Step back into the 60s and follow George as he struggles with bereavement, rejection and a kidnapping that changes his life forever. Resistance is George’s only hope.

Where you can find me:

Patricia M Osborne is married with grown-up children and grandchildren. She was born in Liverpool but now lives in West Sussex. In 2019 she graduated with an MA in Creative Writing (University of Brighton).

Patricia writes novels, poetry and short fiction, and has been published in various literary magazines and anthologies. Her first poetry pamphlet ‘Taxus Baccata’ is to be published by Hedgehog Poetry Press during 2020.

She has a successful blog at Patriciamosbornewriter.com where she features other writers and poets. When Patricia isn’t working on her own writing, she enjo 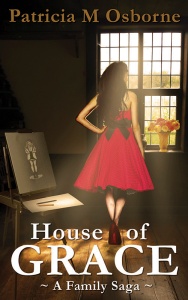 ys sharing her knowledge, acting as a mentor to fellow writers and as an online poetry tutor with Writers’ Bureau.

The Coal Miner’s Son is the second book in the House of Grace trilogy.

Writer, author, amateur historian and traveller
View all posts by Rosemary Noble →
This entry was posted in Uncategorized. Bookmark the permalink.