A Place to Call Home

When I am deep into writing, I cannot settle to read other novels. As I am an avid reader, this a loss I will have to make up for at some point soon. I even balk at watching TV. The book, my book, consumes me. I have finished the first edit and it will soon be time to let beta readers pull it apart before I let my editor get her hands on it.

The only diversion I have and am addicted to in the odd hour of recreation I allow myself is a box set of A Place to Call Home, set in 1950s Australia. 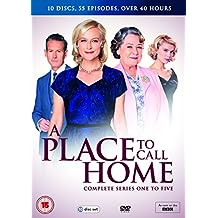 Finding it was pure chance. My husband knows I like to watch anything Australian and he happened to record half a dozen episodes – not from the beginning. Two episodes and I was hooked, so much so that I ordered the set, a first for me. I’m almost at the end and am now trying to understand why I am so gripped. The lead female is almost too perfect, the lead male tends to sound like a vicar giving a sermon in his intonation, but the story is utterly compelling. The family are from the squattocracy (Australian aristocrats) rich, entitled, benevolent and hidebound. However, change is afoot and the grandmother, who is superb, has to be led kicking and screaming to alter her attitudes to just about everything. She is a noble character – in the true sense of the word. She holds the family together, come what may, and it is her that we come most to love and appreciate.

For me it is the social history of the era which is so fascinating. Here we see the remnants of ‘White Australia’ and its mistrust of Catholicism, of aboriginals and of other ‘suspect’ white races or religions. Prejudice abounds, social class rules, sex is hidden, homosexuality can be ‘cured’ – horribly. But you root for the characters as the saga unfolds. There’s a great sense of place in the small town, an hour or so out of Sydney, where ordinary people get on with their lives despite the shenanigans at the big house. Respect for their ‘betters’ demonstrates the Englishness of this period in time. The effects of the war are still being felt but the sixties are on the horizon. Cars, fashion and nightlife add beautifully to the sense of era.

If you like a story and family, you can get lost it – try it. I will continue to soak up the language, the contradictions and my added understanding of what makes this county tick. One thing – don’t expect to see any wildlife other than a dog and a few sheep.

Writer, author, amateur historian and traveller
View all posts by Rosemary Noble →
This entry was posted in Reviews. Bookmark the permalink.

1 Response to A Place to Call Home