I think I have found the title of my WIP. It came to me last night out of the blue as all the best titles should. As usual I had been overcomplicating things again by wanting Yarra or Yering in the title. However, the Yarra Valley represents only a fraction of the book, while the main theme is about the effect of both world wars on Sadie’s life.

This third book in the Currency Girls series is proving the most difficult to write. I have been toying with flashback chapters but am now veering back to sequential. I think and editor will have to advise me in the end. This is the only photo I have of Sadie, standing 2nd left as a bridesmaid at her half-brother’s wedding. She standing next to her seated grandmother, Jane, The Digger’s Daughter. 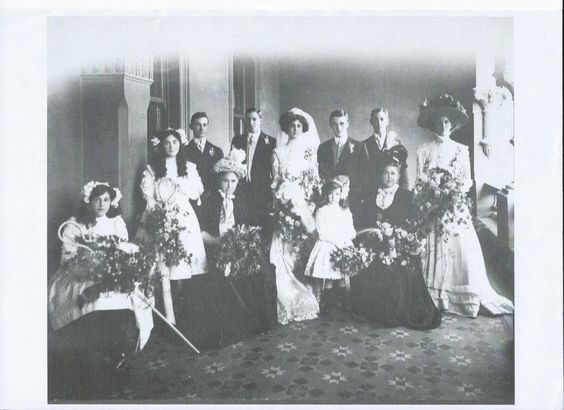 The elevator pitch – a beautiful and wealthy young woman casts aside her first love because he won’t fight for the empire. From this point, her life unwinds with devastating consequences. Can she make a new start in a new country?

When will it come out, I hear you ask? Possibly before Christmas but maybe early next year.

A general question – do you like flashbacks or not?

Writer, author, amateur historian and traveller
View all posts by Rosemary Noble →
This entry was posted in Book Launch. Bookmark the permalink.