Is this a year when I will release another book to the world? I’ll try but if it has to wait until 2019 then so be it.

I always start New Year with the will to clear out rubbish. This year it’s not me but my husband who is culling his wardrobes and cupboards, ready for some new furniture. Not totally new, just hand me downs from a neighbour, but it’s doing the trick. The piles of unused clothes ready to go to charity are growing. Why ever did we need to keep so many blow up pillows for aeroplanes, or a travel iron, or coins pre Euro days?

What am I doing while all this is going on? Reading the most gorgeous little book which came from the British Library for Christmas Eve. My best Christmas present, almost my only one as we decided not to go mad this year and bought for children mainly. Socks, the item of choice for adults. 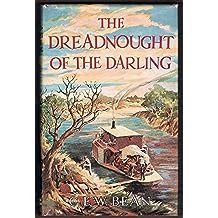 Why is this book so gorgeous? It is The Dreadnought of the Darling by C E W Bean and very few copies exist in England. Mine came from the BL repository up in Boston Spa via Darlington Library. I wonder why someone in Darlington Library considered buying a book about the Darling River in Australia in the early 1900s. Thank you to that mysterious librarian and thank you to the person who saved it and sent it to the British Library.

So encapsulated within this treasure of a book – which I would love to own – is the wonder of the Darling River and its surroundings,  in the era of paddle-steamers serving the sheep stations between Bourke and Wllcannia in New South Wales. It’s all here, the people, the flora, fauna, geology, economics – everything I wish I could know. For example, his chapter on His Majesty’s Mail.

“We dug it out – a battered old infantry bugle, minus a proper mouthpiece. The driver took it and blew a long call across the still night. A little later he blew it again. ‘My missus’d give it to me if I didn’t give her that call,’ he said. A few minutes later the coach climbed out on to a ghostly white sandhill and ploughed slowly up it. As we lurched over the summit, there lay, spread out beneath us a weird expanse of unreal white. It was the sandy bed of a small lake – Lake Yoe – absolutely dry. On a slope of the hill was a dark square from which glowed a smaller square of warm yellow light. It was the driver’s cottage. Inside there was presently waiting for us, warm and steaming, one of the most grateful suppers to which I had ever sat down.

There far back on the border of the Darling country, was the first place that I saw a coach horn used in earnest. …We had been somewhat surprised at it when we first saw it as rather an unnecessary affectation in a country in which the sentiment is dead against affectations.”

That last sentence is totally Australia. But I love the way Bean brings everything to life, and you can picture each moment. Much of what he writes about, was a last gasp of that life,  as the railways and air flight took over. Cobbs coaches and the river paddle steamers disappeared – the latter now used only for a tourist trip of an hour or so. Gone were six week journeys up and down the Darling /Murray river system or 36 hours nonstop mail coach rides twixt river and railway terminus, other than a brief stop for meals and ‘comfort breaks’.

I am trying to imagine what it must have been like for Jane Granny when she travelled from a small coastal town in England in 1916 and found herself a newly married woman on a sheep station on the Darling River, cut off from everything that she knew, cut off from other women, in temperatures that she couldn’t have imagined. I wish I could talk to her about it.