Posted on December 1, 2017 by Rosemary Noble

I rarely read a book twice. I know I should but there are so many books, too many for one short lifetime. If my book club selects a book I have already read, I usually wing it. But this time, they chose an author I had recommended and, in my view, the book which has 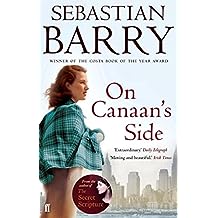 stayed with me longest, On Canaan’s Side by Sebastian Barry. The other reason I have read it is that I vowed to have two days away from a screen because I have a problem with my right eye. Suddenly, I am faced with ridiculous thoughts – what if I can’t read anymore – or write? How would I cope with losing that? It doesn’t bear thinking about.

To return to the book. All of Barry’s books are connected in some way. Characters reappear, sometimes out of the blue, but On Canaan’s Side is really a sequel to Barry’s WW1 novel, A Long, Long, Way From Here. Lilly, the sister of soldier, Willie, becomes engaged to Tadg, a soldier buddy, who comes to tell the family how Willie’s died. In the complicated politics of Ireland after the war, Lilly and Tadg have to flee Ireland for America.

I don’t like to give away more of the story than that. Suffice to say, Lilly’s life is hard and full of loss but she never gives up. This story reveals what war does to women and to men.  But there are more wars than the physical ones; civil rights and the how powerful men treat powerless women, also come into play. This very understated book lays bare the huge questions and issues which affect the lives of ordinary people. It does it with language, so full of poetry and imagery that it makes the heart stop and pause. It does it with an intimacy of a  life, lived in the service of others, with little thought for herself. So much so that you feel that the writer speaks only to you. You leave it feeling as though you understand the world better, although that understanding makes you feel raw while at the same time, blessed.

This book goes into my top ten.

Writer, author, amateur historian and traveller
View all posts by Rosemary Noble →
This entry was posted in Book Review. Bookmark the permalink.

2 Responses to On Canaan’s Side