When writing historical novels it is difficult to gauge how much time it takes to travel from A-B. Even in England the state of roads was appalling until they were covered in tarmac, but when was a particular road given the McAdam treatment, let alone tarmac?

In Australia, where the distances are so much greater, it is even more difficult. In the 1860s the Timms family (Timmins in my book), traveled from Creswick Creek in Victoria to Whroo. Today the journey would take about 2 and a half hours. How long would it take to walk or go by buffalo cart? Whroo lies north west in this photo taken from Murchison Gap Lookout.  Alexandra lies to the east, their next long journey. 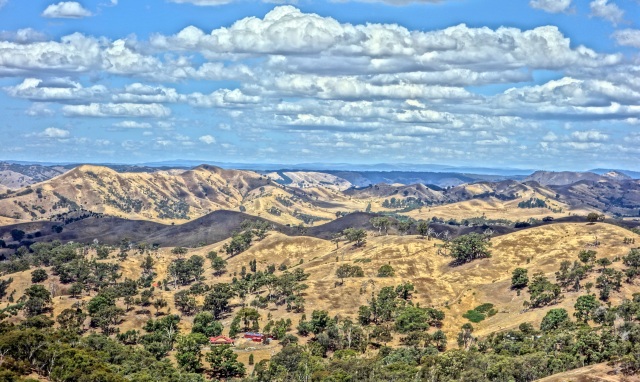 Even by the 1920s many roads in Victoria were not tarmacked. Again I did not know this until I saw a photo in a pub in Yarra Glen where the main street was nothing but dust in the summer and compacted mud in the winter.

Writer, author, amateur historian and traveller
View all posts by Rosemary Noble →
This entry was posted in Digger's Daughter. Bookmark the permalink.